When it comes to Superannuation (amongst other things), the media and the government have a lot to answer for.

It seems that every time the world share markets have a volatile week, the headlines scream “Australian super funds tumble by $20 billion” or “Super funds on roller coaster ride”. Reading sensationalist headlines like these that are designed to sell newspapers, you’d be forgiven for thinking Superannuation is an investment. However, superannuation is not an investment…it’s a tax structure. Within super you can choose to invest however you like – provided it’s within the rules. It’s just that on average most people invest in a default Balanced fund which would typically have 60%-70% allocation to Australian & International Shares, plus a bit of listed commercial property. So when the share market is volatile, so is the average Australians super balance (however of course it must be Superannuation’s fault…not the underlying asset allocation).

Added to this the government keep changing the rules. I attended a superannuation regulation update during the past week covering the latest round of changes. At the end, the room of 30 superannuation advisers and accountants who had all been in the game for a couple of decades or more, were left with their heads spinning.

The government want people to save and plan for their own retirement, but continually changing the rules….along with (only occasional) media sensationalism….erodes Australians trust in the superannuation system. It also causes most Gen Xer’s & Gen Y’s to disengage with their superannuation.

As we covered in Wealth Creation for Gen X – How much is enough…really? in order for you to achieve Financial Freedom and get to the point where you don’t have to work for the money anymore…you are likely to require significant investment assets in order to cover your future desired lifestyle. Plus, remember the government will not be in a position to help you financially like they do current retirees. What about adding in the inevitable rise in superannuation accessibility age? Throw this altogether and what does it mean for Generation X? That it’s crucial to build multiple income streams…both inside and outside of superannuation.

Recent rule changes have again lowered the amount people can contribute to superannuation pre tax….to $25,000 from 1 July 2017. Again, the government want Australians to save into superannuation and fund their own retirement but “hey, don’t put in too much!”. Restrictions have also been reintroduced on the maximum people can have in superannuation at retirement taxed at 0% in pension phase. Whilst I agree with this particular rule change in principle…as I believe we should all pay our fair share of tax…rule changes like this further erodes confidence and trust in the super system as people and advisers make decisions and provide advice in good faith based on rules at the time…and then the goal posts are moved.

Let’s say you are age 40 on a wage of $100,000 (plus super) with $150,000 already built up in your superannuation fund. Assuming 9.5% super contributions on your wages (with your wages growing by AWOTE) and a Balanced mix of assets….you are likely to have over $1,000,000 (in future dollars) in superannuation at age 60. Not a bad start…keeping in mind this is without salary sacrificing a single cent. But as we covered in Wealth Creation for Generation X – How much is enough…really? depending upon your Desired Retirement Spending for life after work, you may need around $3,000,000+ (in future dollars) income producing assets (combined inside and outside of superannuation) at age 60, if you plan to be financially free by then and cover your Desired Retirement Spending level for 30+ years. Employer Super contributions cannot be solely relied upon to create future financial freedom.

And what about self employed / business owners? I continually see self employed clients with only minimal amounts in super when they first come in for an initial wealth strategy meeting (specifically self employed people who don’t pay themselves a structured wage from their business). Superannuation for the small business owner is usually the last thing to get paid for a self employed person. For an employee it’s easier, they don’t have a choice and don’t have to think about. Self employed people have to think about it…and it takes self discipline. Self employed people should actively “take money off themselves” and ideally contribute a minimum of 9.5% of their income into superannuation – just like if they were an employee earning a wage (or paying themselves a structured wage from their business). If you are self employed and not doing this, you are likely to be falling behind. Regular, smaller amounts on a monthly basis throughout the year are the way to go rather than one lump sum around May when you do tax planning. Consistency is the key…not necessarily when you feel like you can afford it.

Provided health is strong, I’d say most people would love to crack a century. However, from a financial perspective, most peoples greatest risk is that they will outlive their money.

And it’s this point where I believe superannuation is more relevant than ever.

Linked to Longevity Risk, the two reasons I believe Superannuation is more relevant than ever for Gen Xer’s are;

Einstein called Compounding the 8th wonder of the world. Many people don’t contribute extra money into super because they can’t access it….however in most cases that’s a good thing! The main reason most people don’t create significant assets outside of super is due to them being able to access and spend the money – causing them to miss out on the lost opportunity of future growth of these assets. Funds inside of super are left to grow and compound over the long term and create a significant asset to help in building towards your future financial freedom. Plus at a lower tax rate of a max of 15% in Accumulation phase (as per below) and 0% tax in Pension phase, all things being equal, assets inside of super are likely to build at a greater rate versus assets outside of super, due to less tax being paid on the earnings…meaning more of your money is left to work hard for you over time. 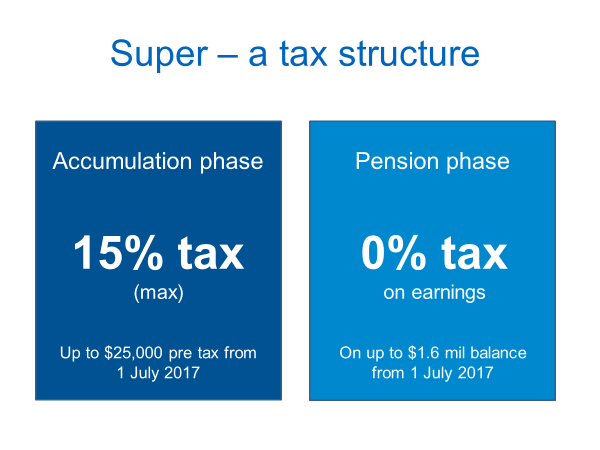 Should you make additional contributions into super?

Whether or not you should contribute further pre-tax contributions over and above the 9.5% on wages depends upon cash flow and your overall situation, however a person on the 39% tax rate (earning between $80k – $180k) saves 24% tax by making pre-tax contributions into super. On say $10,000 per annum of extra super contributions, that’s $2,400 tax saving per year, and an extra $8,500 (after 15% contributions tax) growing and compounding for your future financial freedom. Sure there is $6,100 less in the persons after tax income (around $500 per month), but this probably would have just been spent anyway…the more we earn, the more we spend.

One thing I know for sure is that if you choose to contribute extra money into super in addition to the 9.5% on your wages (or equivalent for self employed people), your future self will thank your current self during “life after work”.

Whilst I’ve been making extra super contributions for a while now, last year both my wife and I started maximising super contributions. I must say my beautiful wife is still not overly thrilled in having a lot less money in her fortnight pay, but no doubt she will be happy about it longer term after experiencing the dramatic positive impact this will have on our future lifestyle…(just think of all those extra future holidays Bella!).

The below table shows the additional benefit to your projected super balance from contributing extra into superannuation. It will always be worthwhile adding extra in. If you aren’t currently contributing anything extra into super, and you are unsure if you can afford it, it can be a good idea to just do it…but start off small and build up. Start with $100 per month, then work up to $250 per month until you are comfortable with $500 per month (or even more). You’ll find the money and after a few months you won’t even notice it….which is the exact time to consider an increase to the next step. As per the below table, an extra $500 per month into super over a 30 year period can potentially give you an extra $600,000 in super at “retirement” over and above what you would have otherwise had. 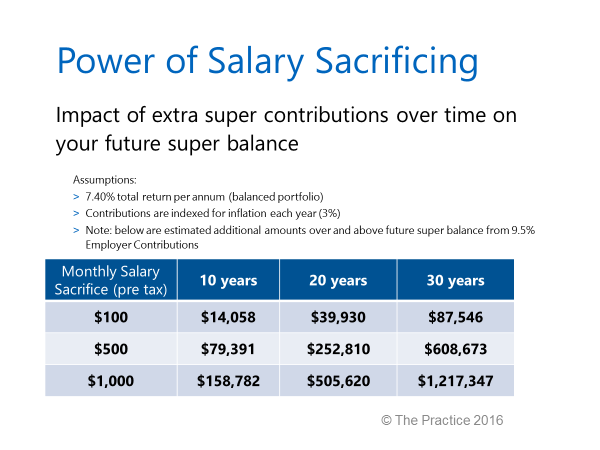 Will the rules keep changing?…absolutely. Will investment volatility continue?…without doubt. However this shouldn’t cause Gen Xer’s and Gen Y’s to disengage with superannuation. In fact we should embrace the idea that time and the power of compounding are on our side. With longevity likely to increase dramatically….superannuation is more relevant to Generation Xer’s than ever. However as we covered in Wealth Creation for Generation X – Where should you invest your money? Superannuation should only be one of a handful of options you should pursue as you are striving to build toward future financial freedom. Either way, you are unlikely to regret pushing yourself to “take money off yourself” and contribute extra into superannuation.

Next week we’ll cover the pros and cons of the 4 main super fund options to choose from including; Industry, Retail, Wholesale and Self Managed Super Funds. Until then resolve to re-engage with your superannuation as part of your overall wealth creation strategy, as it is likely to grow to one of your greatest assets. And start seriously considering contributing extra…remember, your future self will thank yourself!

Matthew Morrison is the Director of Wealth Advisory at The Practice, a Personal Wealth Advisory & Business Advisory firm based in Parkville, Melbourne. Matt along with The Practice team are committed to and passionate about developing & implementing wealth creation strategies for clients to enable them to Fuel their Family’s Future (while protecting them along the journey).

Disclaimer – the above views and ideas are general advice only and are purely the opinions of the author. It’s important that you seek professional advice tailored to your needs before taking action regarding your financial future.

3 thoughts on “Is Superannuation still so super?”